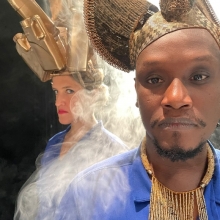 English Theatre Berlin Ort: 10965 Berlin Straße: Fidicinstraße 40
Women in Europe are still fighting for what Rwanda achieved long ago: 62% of their members of parliament are female. In Germany, the figure is just 34%. This East African country declared gender parity the basis of its politics in 1994. Meanwhile in Germany, this kind of parity is still a long way off despite gender equality being enshrined in common law since 1949.

A Rwandan and a German performer discuss numbers and realities from both countries, using a drum as the central symbol of power. They take a peek behind the curtain: if women are empowered, how do men deal with losing their power and what are the lines of confrontation in the home? How slowly or quickly do quotas change a culture and the mindset of a nation?

With speeches, statistics, songs and protest choreography, Learning Feminism from Rwanda follows the trail of Rwandan fast-track feminism from shiny statistics and glass ceilings to hearth and home. Let’s see how much can Europe learn from Rwanda?
Vorgemerkt
Unterhaltung